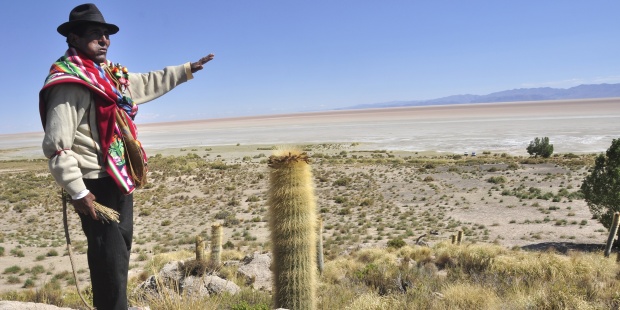 Bolivia’s second largest lake has almost completely evaporated, leaving local fishermen and communities to count the cost of climate change and poor water management in a particularly vulnerable part of the world.

Lake Poopó, Bolivia’s second largest lake, has virtually vanished after a prolonged period of drought in the region aggravated by climate change and El Nino, local authorities say. According to the regional newspaper La Patria, who conducted a flyover of the region last week, the lake “has been converted into an immense desert, with virtually no trace of water, only cracked clay”.

The lake, which would usually measure around 90km by 50km and has historically been the country’s second largest body of water, behind the world-famous Lake Titicaca (shared with Peru), is of considerable importance to the region for its ecosystem, and as recently as 2012 was designated a Ramsar wetlands site for its role in hosting a wide variety of bird and fish species. The latter have also provided local fishermen with a steady way of making a living, supporting as many as 2,000 indigenous families living around the shores of Poopó.

However, the lake has been under considerable stress for decades as seasonal variations in the region have affected its water supply, and it suffered a similar (but not as severe) disaster in the early 1980s. Now, this once-vast expanse of water appears to have evaporated almost entirely, leaving a wasteland of dried mud, dead fishes and other aquatic wildlife, and devastated communities of thousands of local inhabitants whose livelihoods have depended on the lake and its ecosystem. Furthermore, the land in and around the lake is now so parched that local farmers are struggling to even plant crops or raise livestock.

The lake has always undergone dramatic variations in its surface water as it suffers from high evaporation rates and has a limited inflow from tributaries, but locals attest that the situation has rarely – if ever – gotten this serious. Milton Pérez, from the nearby Technical University of Oruro (UTO), said that Poopó usually had a “balanced” six-to-seven year cycle of rising and falling water levels, but this natural cycle has shifted to the point that the lake does not have enough time to replenish its water and support its fragile ecosystem.

The main culprits behind this unfolding disaster are said to be climate change and the resulting fall in precipitation levels, continuous and increasingly severe cycles of the El Niño weather phenomenon and its counterpart La Niña, and contamination and water stress resulting from mining activities which have led to the presence of high quantities of heavy metals in the lake’s water prior to its disappearance. In particular, levels of lead have been shown to be hundreds of times higher than in regular lakes of a similar size to Poopó around the world. Others have suggested that the redirection of some local rivers, including towards neighbouring Peru, has also contributed to the lake losing much of its inflow.

There were warnings from at least a year ago that the lake was under considerable stress from drought and contamination from mining activities in the region, but locals claim they were ignored by the central and regional governments when they asked for works to be carried out to divert some local rivers to provide emergency relief for the lake. According to local sources cited by La Razón, the regional government of Oruro, where Lake Poopó is situated, had declared the lake an emergency zone in late 2014, but there has been very little in the way of follow-up from authorities since then.

In the few days since the fate of Lake Poopó became more widely known, local indigenous groups have mobilised to put more pressure on authorities by requesting emergency measures and a meeting with officials from the Environment Ministry in La Paz. The governor of Oruro, Víctor Hugo Vásquez, has since announced a series of measures, including the diversion of some water from the nearby River Desaguadero and the construction of a water treatment facility. However, these measures have been described by local residents and activists as being too little too late, in response to a long-term chain of events that have led to the disaster.

Post-COP21, climate change in the here-and-now

What has happened in Poopó is a timely – if somewhat stark – reminder that in amongst all the positive vibes and celebrations around the Paris Agreement on climate change, reached at the COP21 summit in Paris last week, the impacts of climate change on vulnerable communities and ecosystems are not just some abstract event that may happen in the future if global greenhouse gas emissions are not curbed – they have already arrived and are here to stay.

It should also bring into question the lack of agreement in Paris over the loss and damages element of a global climate deal, after parties at COP21 were unable to agree on the inclusion of a clause committing richer countries to provide compensation to vulnerable countries who will continue to suffer as a result of carbon emissions and temperature rises that are already ‘locked in’. Local sources from Poopó suggest that many farmers and fishermen will now have to leave the area and find work elsewhere, including as far afield as in neighbouring Argentina or Chile, and indeed there are reports that some have already made this journey over the past year.

In this sense, they would represent just the latest real-life example of ‘climate migration’, a phenomenon that experts sagely predict will potentially lead to hundreds of millions of people being forced to abandon their homes in the decades to come as their communities are devastated or destroyed by the effects of climate change, including sea-level rise and coastal flooding, or desertification.

This could well be the case with the people who have built up their communities around Lake Poopó over the centuries. According to the local leader Valerio Rojas, who spoke to La Patria, locals fear that this time the lake’s waters will not recover due to the increased temperatures that have been registered in the Bolivian altiplano in recent years. “There’s little hope of the water returning, we don’t believe that the lake will ever return to the way it was, and for that reason it seems there’s nothing left [for us] to do but migrate in search of other work”.

Note: This article was updated on December 16th 2015 to include a short video clip showing how Lake Poopó’s waters have receded over the last couple of years.