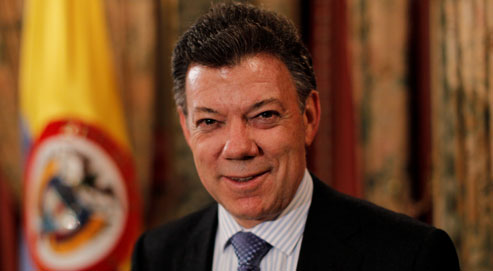 (Translation) Juan Manuel Santos, President of Colombia, writes about Colombia’s peace process and its implications for the rest of the world, in an exclusive column published in Spain’s El País.

A few weeks ago, in front of the General Assembly of the United Nations, I recounted the story of Constanza Turbay, a Colombian woman who lost almost all her family at the hands of the FARC guerrillas.

In Havana, where our peace talks with this guerrilla organisation are taking place, Constanza had the opportunity to look her relatives’ assassins in the eye and tell them her personal tragedy, one that is shared by millions of victims of a senseless war fought between sons and daughters of the same nation.

For the first time, Constanza heard the profession of a heartfelt apology from one of the FARC’s leaders. In the words of this valiant woman, the conflict’s victims are now “swapping their grief for the hope of peace”.

This desire for reconciliation felt by the vast majority of Colombians is exactly what has driven the real and serious attempt that we Colombians are making to attain peace.

But having this hope does not imply naivety on our part. We are well aware of the fact that we are negotiating with our enemies. We understand that the country has suffered greatly from countless murders, bombs, abductions and extortions.

Yet it is for that reason that we have to broker an end to this armed conflict once and for all. It is far easier to make war instead of peace; I know this full well because I was Minister of Defence and I dished out some of the hardest military assaults in our entire history to the guerrillas.

The process that we have been undertaking in Havana for the past two years – with the backing of Chile, Cuba, Norway and Venezuela – is one that has been serious, realistic, dignified, and effective, and it has resulted in some definitive breakthroughs.

The first three points, on which we and the guerrillas have already agreed, represent profound changes for Colombia: making historic investment in rural development – the root of the conflict – a reality; swapping bullets for the ballot, which would bring about a deepening of our democracy; and the dismantling of the mafia-esque structures of drug trafficking, accompanied by a great national programme of crop substitution and alternative development, which would bring us closer to a Colombia without coca [the raw ingredient for cocaine].

We have come so much further than ever, and yet it is also true that we are entering uncharted territory and the most complex stages of the peace process: the points that cover the topic of victims and transitional justice, and what is referred to as DDR: disarming, demobilisation, and reintegration. They are tricky subjects, without a doubt, but if the will to negotiate can persist – as it has done up to now – I am confident that we will come to satisfactory agreements on these issues as well.

Many will be asking: ‘why is this important for Europe or for the rest of the world?’

There are many underlying reasons why it means so much. The first is that we would become the first country to have negotiated the end of an armed conflict within the Rome Statute of the International Criminal Court. What happens in Colombia will have profound consequences for the resolution of future conflicts in all parts of the world.

Second, silencing the guns means recovering enormous stretches of the Colombian countryside. Colombia, with a territory slightly larger than that of Spain and France combined, is considered by the FAO to be one of the eight countries in the world that have considerable potential to boost their food production, and to the extent that recovered land could become productive again, we can be in a position where we can contribute more decisively to global food security.

Third, the dismantling of the drug trafficking cartels will reduce the amount of cocaine that ends up making its way from South America into European capitals, helping to lessen the devastating impact that the production of cocaine has on the environment. Colombia is the country with the highest biodiversity per square kilometre on the planet, and the conservation of our ecosystem is of utmost importance to the rest of humanity.

Finally, peace is a good deal from a business perspective. The Colombian economy has the highest growth rate and lowest inflation rate in Latin America – and even compared to OECD member countries – and is one of the highest recipients of foreign investment. In the last five years alone, trade between the EU and Colombia has grown by 25%. This growth – and it is worth emphasising this point – has been achieved with equity, generating good quality jobs and significantly reducing poverty.

If we have been able to achieve all this in the midst of an armed conflict, imagine the Colombia that we could build in peacetime! Recent studies have suggested that, if the conflict were to end, Colombia’s annual GDP could permanently grow by an additional two percentage points, which would translate into incredible opportunities for investment in infrastructure, tourism, and technological development for companies, especially European ones.

In a world increasingly threatened by the winds of war, today Colombia is offering a hope of peace. In a world rattled by economic uncertainty, Colombia is providing opportunities and stability.

This is a translation of President Santos’ column originally published in Spanish in El País. The original can be found here.