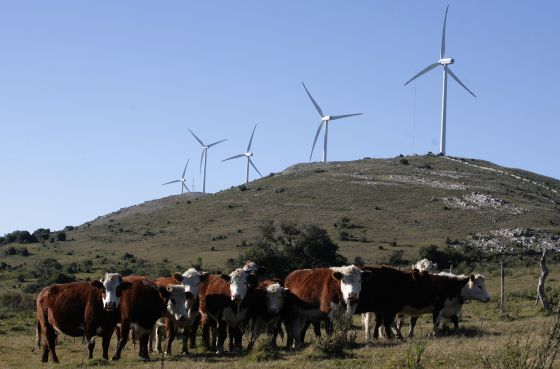 Uruguay has significantly increased its production of electricity from clean renewable sources, resulting in cheaper energy bills for families and businesses, proving that switching to renewables needn’t always be costly.

Last month, it was revealed that Uruguay was on course to overtake Denmark as the number one country in the world for generating wind power as a percentage of its overall energy needs. By 2016 it is projected to obtain more than a third of its electricity from wind farms, in line with a national plan to generate 90% of its overall energy needs from renewable sources by the same date.

Stories such as this have tended to remain hidden from the front pages, usually being kept the preserve of specialist environment and sustainability circles. However, the most recent revelation of South America’s smallest country’s progress in developing its renewables base has set tongues wagging for a much simpler, more accessible reason. With the rise in cheap and sustainable energy from wind, hydroelectric, and solar sources, Uruguayans have seen their electricity bills start to fall, meaning that they are finally able to start reaping the rewards of years of national planning.

From this month, households are expected to pay 5.5% less for their energy, provided by the public utilities firm UTE, while small businesses will enjoy a 6% reduction. The relief that this will bring to Uruguay’s population of 3.2m people is perhaps magnified when put in the context of overall inflation, which is up around 8%. It can also be set against the wider history of energy prices in Uruguay, which has few oil or gas deposits of its own and has therefore had to import its energy-producing fuels from neighbouring countries. This has often resulted in relatively high costs for consumers (energy bills still linger above 10% of the average family’s monthly income), as well as a burden on the national economy’s productivity.

Now, though, some 84% of Uruguay’s energy comes from indigenous sources, such as wind, solar, hydroelectric, or biomass thanks to the by-products of the country’s major agricultural sector. It is reckoned that energy from clean renewable sources (solar and wind, rather than large hydroelectric dams or biomass) will soon provide 40% of total demand, which compares rather favourably with the global average of 17%.

All this is thanks to a national strategy which, since 2008, has seen Uruguay invest the equivalent of 3% of its annual GDP in modernising and greening its energy mix. “In Uruguay we’re talking about a long-term policy and that is key”, says Ramón Méndez, the country’s Energy Secretary since 2008. “Very few countries in the world have such a policy”.

Where the Uruguayan model also varies from those of other countries, though, is that rather than encouraging its nascent renewables sector through subsidies and tax breaks, it fosters a partnership between the public sector – represented by UTE – and the private sector – often in the form of foreign companies such as the Spanish R del Sur.

Javier Tirado, a project leader with R del Sur, explains in a report by El País (link in Spanish) that wind power is “fairly stable in the long term, but quite variable over short periods of time”, meaning that it is seen as a good business investment. “We Spanish companies are a majority in Uruguay because we are pioneers in the renewables sector”, he continues. “The Uruguayan case is pretty unique; it’s a small country and therefore it’s an ideal scenario for the State to confront [the need to develop renewable energy] in a controllable manner”.

“The introduction of renewables increases our energy sovereignty”, says Méndez. “It’s all about economic survival. All of this has allowed us to guarantee energy provision, something that in the past was far from trivial in Uruguay”, the Energy Secretary says in reference to the historic difficulty that many people faced in heating their homes during the Uruguayan winters. “So much so that last summer we were able to export the equivalent of 50% of our energy consumption to Argentina”. Indeed, there are suggestions that Uruguay could become entirely self-sufficient in energy terms within ten years, rather than having to rely on fossil fuel imports when drought affects its capacity for hydroelectric power, upon which Uruguay has depended for some time.

Perhaps most importantly, though, Uruguay’s success in developing its renewables sector and bringing down energy bills for its population should serve as a lesson to the rest of the world that smaller (and less rich) countries such as Uruguay are certainly capable of delivering the kind of investment needed to transform their energy systems. One of the main barriers to governments further devoting themselves to embracing their respective countries’ renewables potential, it seems, is the idea that it is too costly, particularly as many countries continue to recover from the global financial crisis.

Yet Uruguay is showing that it is perfectly feasible over a relatively short period of time, while the passing down of savings to consumers suggests that a switch to renewables shouldn’t be such a tricky political topic for governments either. Solidifying a cleaner and more sustainable energy system, increasing energy independence, bringing down bills for families and businesses, and of course playing a part in bringing down carbon emissions and confronting climate change, and all at the same time – surely that’s a no-brainer? Uruguay seems to think so.

One thought on “Uruguayans reap rewards of national renewables push”