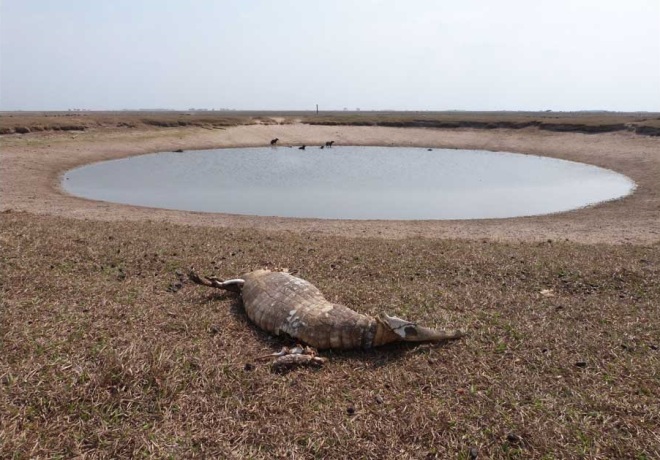 A severe drought has hit Colombia’s north-eastern department of Casanare, leaving thousands of animals dying of thirst and once-green landscapes parched and brown. But who or what is to blame?

March 22nd was World Water day, leading many across the globe to ponder issues of water scarcity and accessibility in developing countries, among other topics related to humankind’s most essential natural resource. Meanwhile in Colombia, though, national media has been filled with chilling reports and images of what happens when water scarcity becomes widespread and prolonged, even in a region as green and pleasant as Casanare would normally be. The department, located in the centre-northeast of the country, is well known for its rolling upland plains and savannahs, known in Colombia as llanos, and home to many farming communities.

However, in recent months it has been gripped by a seemingly everlasting drought, with no rain of any significance since December and temperatures persistently above 40°C. Stretches of green grassland punctuated by rivers and watering holes for the region’s many herds of cattle and capybara (the world’s largest rodent, found in significant numbers through Colombia and other Latin American regions) have been turned to dust, and have become littered with the corpses of Casanare’s normally-thriving wildlife, which has been unable to cope with the lack of water. Farming activities, whether tied to livestock or crops, have been devastated; according to Casanare’s leading environmental authority, the Corporación Autónoma Regional de la Orinoquía (Corporinoquía – Autonomous Regional Corporation of Orinoquía), more than 10% of Casanare’s animals have perished so far. These include capybara, cows, deer, and even turtles, crocodiles and catfish, as rivers, ponds and watering holes have dried up and turned to mud.

In among the visible desolation and tragedy of the drought, locals and other onlookers are scratching around to try and determine who or what could be to blame for an unprecedented ecological disaster of this scale. Three key potential culprits have been identified: climate change, farming and pastoral activities, and oil companies who operate in the area. Tied in to all three are accusations of poor governance from local and national authorities.

Firstly, the spectre of climate change as a cause of the ongoing drought is based on easily recognisable trends. The dry season, while not uncommon in Casanare’s climate, has been particularly harsh this time around, with no respite for the region’s flora and fauna. On the whole, Colombia, with its varied climate ranging from low-lying coastal areas to the peaks of the Andes via the Amazon rainforest and upland llanos such as those in Casanare, is particularly vulnerable to the effects of climate change. Not least among these are changes in seasonal and rainfall patterns, such as those apparently being experienced in Casanare, and which climate scientists have long warned about. Alexis Duarte, Agriculture Secretary in Casanare’s local government, has said he agrees with the hypothesis that climate change is largely to blame for the drought, although he warns that a lack of logistics and equipment means that there is no likely solution in the short term. Meanwhile, Corporinoquía’s woodland wildlife director, Ricardo Combariza, also insists that long-term global climate change is a major driver of the drought, noting that “the intense summers of other years may have also left many animals dead, but not on this scale. Wherever you go there are capybara, fish, birds and livestock reduced to nothing. It’s that this drought has been longer and more severe (than before)”.

However, some national authorities such as the Environment Ministry and the Instituto de Hidrología, Meteorología y Estudios Ambientales (Ideam – Institute of Hydrology, Meteorology and Environmental Studies) have suggested that dry summers such as this are par for the course in Casanare and surrounding regions, and they have argued that local authorities and farmers didn’t do enough to gather sufficient water reserves during the rainy season, which normally falls between June and November. “Orinoquía has 47% of the entire country’s subterranean water supplies, and they are not being utilised as they should be”, argued Ómar Franco, director of Ideam.

With this in mind, the two other potential culprits – agricultural activities and oil companies – could be linked to depleted water reserves and the reasons for Casanare being left particularly vulnerable to this year’s dry season. Farming and herding have become a significant element of the Casanare economy, with locals taking advantage of the region’s rolling plains and lush grassland. However, this has led to techniques such as deforestation and irrigation being employed across the area, affecting the landscape and hydrological cycles. Irrigation, in particular, uses up significant water resources as farmers attempt to ensure the viability of crop cultivation and cattle herding throughout the year, including during the recurring dry seasons.

However, these activities have been a large part of Casanare life for generations. What has not, however, is the oil industry, which has grown in importance and scope across the region in recent years. Local groups and observers have noted the vast water resources used by oil companies in the processes of exploration and drilling for oil, while there are suggestions that hydraulic fracturing – also known as fracking, and renowned for being an incredibly water-intense method of extracting oil and gas from rocks far beneath the surface – has been introduced as a technique to the region over the past couple of years. In addition to the capture of Casanare’s water resources by petroleum activities, locals have also complained that toxic waste and pollutants have infiltrated the water table and rivers. An editorial for the Colombian daily El Tiempo (link in Spanish) points to evidence from the state oil company Ecopetrol that it has carried out fracking in Casanare’s oil fields, and draws comparisons with Texas – apparently cited by Ecopetrol as a shining example of the “success” of fracking – which has come to suffer from severe water shortages.

The suspicion held among many observers of the recent drought is that oil activities could well be the leading culprit for the disaster, above even the prospect of climate change. On March 25th the Attorney General of Colombia announced that it would open investigations into whether oil companies operating in Casanare have been guilty of misuse and overuse of the region’s water resources. The Crimes against Natural Resources Unit from within the Attorney General ordered three teams to examine and determine to what extent the drought could be a consequence of global warming and climate change, and to what extent it could be due to “the capture of hydrological resources by the different companies that operate in the area”.

This move is among other government measures, announced by President Juan Manuel Santos on March 24th, to send aid to Casanare and help communities and authorities there to relieve some of the worst effects of the ongoing drought. Included among these measures are the release of funds from the Dirección Nacional de Gestión de Riesgo (National Risk Management Council), amounting to over a billion Colombian pesos (around US$500,000), as well as the deployment of four Army and Police helicopters in order to help bring much-needed resources to Casanare’s more remote areas. In addition to this, public and private companies, including several petroleum producers, have teamed up to organise a fleet of tankers which will make 100 trips a day to the embattled region, providing up to 320,000 gallons of water each day. This water will then be distributed among the region’s most affected spots, with the help of further trips undertaken by the tankers. Some locals have called for authorities to grant them permission to bore additional wells to dry and draw up any remaining groundwater, but this has been accompanied by warnings that such measures would be dangerous (possibly due to the threat of contamination of these waters by oil) and could also lead to further hydrological imbalances across the affected area.

Longer-term analysis of who or what exactly may have helped cause this unprecedented environmental disaster will likely have to wait until after the worst of the drought is over and shorter-term necessities of relieving the plight of Casanare and its human and animal inhabitants have been met. However, the likelihood that the real culprit is one of the three mentioned above – or indeed a mixture of all three – means that solutions will not be of a quick-fix nature. If agriculture is to blame, regional authorities will have to be swift and effective in enforcing new regulations over the use of water and, perhaps more importantly, the storage of rain that falls during the rainy season so that it can be used during periods of prolonged drought such as this. If oil activities are to blame, then authorities must question if the economic benefits of oil extraction match up to the negative consequences the industry is having on surrounding ecosystems and communities; a balancing act that is, of course, present across all parts of Colombia, Latin America, and indeed the world. Furthermore, as with agricultural practices, oil activities must be subject to stricter environmental regulations that ensure minimal damage to the biosphere and a far more efficient and responsible use of hydrological resources.

Finally, if climate change is to blame, then the Casanare drought must be added to the vast list of examples of climatic extremes that have proliferated around the world in recent years, which seem to point to evidence of climate change having an impact on extreme weather and seasonal variations around the world. The Colombian government should see what a terrible impact the drought is having on Casanare, and strengthen its commitments to act in unison with other world governments to implement global measures to limit the worst effects of climate change, by bringing down carbon emissions and enforcing a more sustainable model of economic development. It should also be remembered that drought is far from the only type of extreme climatic event that Colombia is vulnerable to: in 2010-2011 vast swathes of the country were swamped by devastating floods, leaving hundreds of people dead and billions of dollars’ worth of damage.

Perhaps one initial conclusion to take from the Casanare drought is that it is not necessarily the work of climate change alone – the blame could just as easily be placed at the feet of poor practice, both from the oil industry and from local farmers and herders. However, it could be a harbinger of what can happen to regions affected by climate change in the future, if the correct measures such as water preservation and rationing are not put in place. Climate change will only increase the risk of situations such as that in Casanare playing out and developing into widespread disasters, even if climate change itself is not the main driver of such disasters. As Andy Jarvis, a climate change expert from the International Centre for Tropical Agriculture (CIAT) based in the Colombian city of Cali, says: “We live in a planet battered by global warming, and what is happening at the moment in Casanare is yet more evidence that any alteration in the climate, however small it may seem, can have devastating consequences that will become more and more frequent”.

In related news, The Guardian has reported on efforts to alleviate similarly severe drought conditions in the north-east of Brazil. Initiatives being drawn up by the government of Dilma Rousseff could become blueprints for other countries struggling with drought and desertification, according to the report. Read more at: http://www.theguardian.com/global-development-professionals-network/2014/mar/24/brazil-desperate-for-drought-solutions

2 thoughts on “Colombia: Severe drought in Casanare – who’s to blame?”