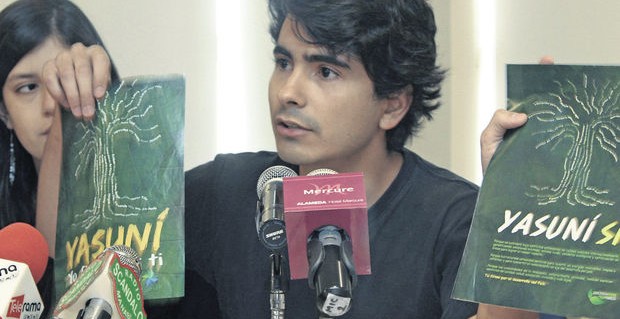 Anti-drilling collective YASunidos say they are close to gathering the required 600,000 signatures to trigger a referendum on Yasuní-ITT oil extraction, but denounce “dirty campaign” and alleged aggression against activists.

The battle to save Yasuní-ITT by collecting enough signatures to trigger a national referendum against President Rafael Correa’s plans to drill for oil in Yasuní National Park is entering a new phase, with just three weeks to go until the deadline passes for anti-drilling organisation YASunidos to collect the necessary 600,000 signatures. They say they have now gathered more than 480,000 and are on track to meet their target ahead of schedule, but are voicing concern and alarm over an apparent “dirty campaign” waged against them by supporters of President Correa and advocates for the development of the Yasuní oil deposits. This has included a personal intervention by Correa himself, as well as controversies over the appearance in national newspapers of pamphlets similar to the ones used by YASunidos to collect signatures, but which are actually in favour of extraction and allegedly plagiarised by rival groups. Most recently, a YASunidos activist claims to have been assaulted by pro-government figures shortly after a public display of disapproval towards President Correa.

The Ecuadorean daily El Universo reported on March 6th that YASunidos had collected 480,000 signatures, representing some 80% of the required number which itself is based on the principle of 5% of the Ecuadorean electorate expressing their desire for a ‘national consultation’ to take place. However, YASunidos have expressed their intent to go beyond this target – with some suggesting that their aim is to collect one million signatures – as they fear that the Consejo Nacional Electoral (CNE – National Electoral Council) will try to find reasons to annul some of the signatures. “We want to have a good cushion of signatures; we believe that the Electoral Council will try to invalidate many signatures”, said Patricio Chávez, one of YASunidos’ leading spokespersons. The deadline for handing over the signature forms to the CNE is April 12th, but YASunidos is advising citizens that its deadline for collecting signatures from the public will come a week before, on April 5th, so as to give the organisation sufficient time to count and verify its signatures.

Sensing the troubles ahead, defenders of Yasuní-ITT and its indigenous inhabitants and pristine wildlife have denounced a “dirty campaign” against their cause. Activists have always feared that Correa would employ his trademark heavy-handed strategy of verbal assault against his opponents, drawing on the significant personal popularity he still enjoys across the country. While Correa himself has not been quite so instrumental in the recent tensions, he has waded into the debate from time to time, claiming hypocrisy on the part of YASunidos by remarking on the amount of paper used by the organisation in their campaign to collect the signatures, something which he said was not so eco-friendly. The response from YASunidos was fairly direct: they were simply complying with the norms set out by the CNE. Correa has also openly mocked the anti-extraction campaign, saying he would welcome a referendum on the matter as he was “certain” he would win.

Yet the question of following these norms to the letter is behind one source of the recent tensions. Earlier this month, the President of the CNE, which like many public offices in Ecuador has become highly politicised and influenced by the government of the day, cannounced that only signature forms in the original A4 format as handed out by the state entity to YASunidos would be accepted as valid, after smaller replicas appeared in issues of the El Comercio newspaper. YASunidos claim that such stringent conditions were never formally included in the terms relating to their campaign when they were set out by the CNE last October, and cite a clause within the country’s Constitution which says “Justice shall not be sacrificed because of the simple omission of formalities”.

A second instance of a supposed “dirty campaign” involving the forms followed shortly afterwards, with the publication of what appeared to be almost-exact copies of the YASunidos originals, save for minor changes in some of the wording, in El Comercio. The catch? These were forms advocating the extraction of Yasuní oil, and were seeking to get members of the public to sign up for a rival campaign to trigger a national referendum in favour of President Correa’s plans. YASunidos have been highly critical of this latest move, saying that it is a deliberate attempt by opponents of their campaign to “try and confuse people” and thus hinder their chances of collecting the required number of signatures. This is a charge that is denied by the Frente Amazonía Verde Sin Pobreza (Front for a Green Amazon Without Poverty), with one of their leaders, Yofre Poma, who is also Mayor of an Amazonian commune and a member of Correa’s Alianza PAÍS (AP) party, suggesting that any similarities are a mere “coincidence” and due to the fact that the two groups are campaigning on the same issue. “There is a dirty campaign coming, one could say a dirty hand that is stretching out towards Yasuní”, said Chávez, in a reference to the “dirty hand of Chevron” campaign being led by Correa elsewhere.

However, it is the most recent of occurrences that will be most troubling to YASunidos and its supporters. David Mármol, a member of YASunidos, claims that on March 14th he was assaulted by members of President Correa’s entourage, after giving his passing presidential car a thumbs-down during an official event in Quito. Mármol says that he was making a gesture based on the Facebook symbols for “like”/“dislike”, and that shortly afterwards he was detained by the final car in the procession and taken away for several hours. “They told me to ask for forgiveness from Mr President for the insults I had made to him”, Mármol said, having filed a formal complaint with the Attorney General for assault. “But I didn’t insult him, what I did was give a thumbs-down in protest at the extractivist attitude he is promoting”.

Mármol went on to describe how he was then visited by “somebody from the Presidency”, who rebuked him and told him to accept that he had insulted Correa, which Mármol continued to deny. After a while, he was threatened with prison for anything between two months and six years, but he was eventually released. However, shortly afterwards, he was confronted by several men in civilian clothing, who pushed him to the ground and beat him. “I felt a blow on my back which threw me to the ground, where I was beaten by people dressed in civilian clothing and with short hair. They smashed my watch and didn’t say anything to me, they didn’t take anything. No documents, no money, nothing”. Elsie Monge, of the Ecumenical Human Rights Commission, said that what had happened to Mármol could be described as a kidnapping, adding: “This is a crime of physical aggression, violation of human rights and of freedom of expression and participation, and an attack on democracy”.

However, in spite of this instance of aggression by personnel seemingly close to the Correa government, YASunidos are determined not to let such attempts at intimidation affect their campaign to save Yasuní-ITT. “We have faith in our ability to collect all the signatures needed to bring about a public consultation, so it can be the public who decides whether Yasuní National Park should be exploited or not”, affirmed Antonella Calle, another member of the collective. If recent events are a sign of what is to come, they will have to keep their wits about them if they really do want to ensure that the fight to save Yasuní-ITT is carried through to a successful conclusion. This fight will go well beyond the collection of the 600,000 signatures; YASunidos will need to ensure that the CNE does not try to cheat them by invalidating the signatures, whether under pressure from Correa and his supporters or not. Then, the next phase of the battle will begin: convincing the Ecuadorean public to vote YES in the referendum on leaving the Yasuní-ITT oil deposits indefinitely under the Amazon soil; no doubt in the face of a massive publicity drive by the government as they attempt to convince the public – who almost unanimously backed the Yasuní-ITT Initiative while it was still officially in operation – to back Correa’s U-turn and plan to drill for oil. The next few weeks could well be a defining time for the fate of Yasuní.